Never, Ever, Ever Surrender to Adversity 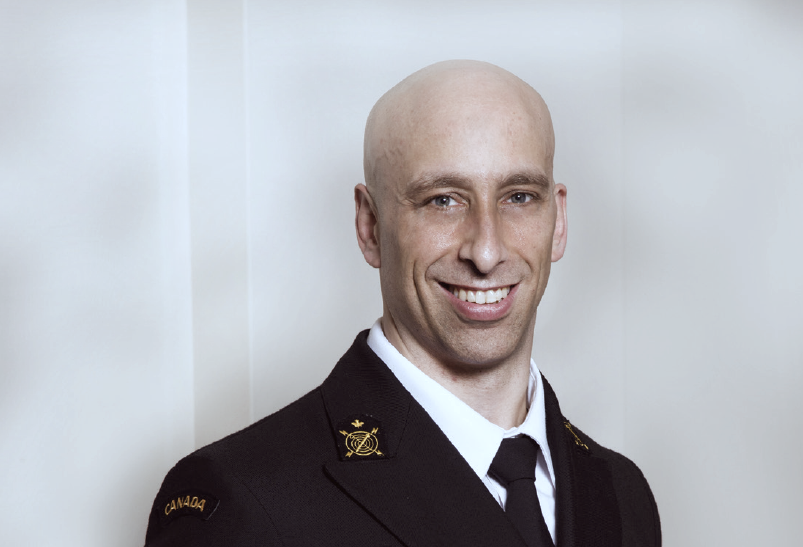 Biloxi (Katrina Hurricane) and now Haiti (Op Horatio – Hurricanes Disaster Relief): it’s 2008. The lone Canadian frigate has been deployed there to help survivors cope with the aftermath of Hurricane Hanna. On board, a sobbing QL5 ranked naval electronic technician closes the door to a small darkened room and crashes. He can easily use his gun during Panama security watches in the middle of the night. After all, “dying is easy; living is hard…” Who is this guy?

Daniel Morin was born on January 6, 1980 to Gemma and Gerald in Edmundston, New Brunswick (NB).  With a population of about 20,000, everyone seemed to know that Daniel’s alcoholic dad had the poorest house on the poorest street in town.  His mother, then living in Grand-Falls, NB, had also been afflicted with severe depression due to an unfortunately difficult life and childhood. Though having food, shelter and even receiving gifts at Christmas, Daniel grew up in a household where fighting was the norm. Already bullied in the neighbourhood, and experiencing constant anxiety at home, he saw school as the only way out of a personal hell. It was his ticket to a better life. Having this clarity of thought at a relatively young age, showed the inner strong attitude and perseverance that Daniel knew would sustain him through thick and thin. As long as he could rely on himself, he would be fine.

During his six years in high school, Daniel retreated into the library at Grand Fall’s Polyvalente Thomas-Albert to get away from bullies where he also indulged his aptitude and passion for science, physics, biology and particularly space. Initially, he had wanted to be an astronaut – Roberta Bondar, Marc Garneau and Chris Hatfield were his heroes. Focusing on studying, brought its just award: Daniel graduated with the second highest marks in his school, and won a scholarship worth $10,500 to the Faculty of Engineering at UOttawa.  He settled into residence, however, there was a price to pay.  With no friends, no support from home, no extracurricular activities and an ever-building anxiety, he dropped out before the end of the first semester in the fall of 1998.

Returning to Edmundston but not living at home, Daniel did not give up. That winter, he applied for the second semester at the University of Moncton’s campus located there.

Working nightshifts at Sobey’s and later as a janitor for up to 26 hours a week, he upgraded his marks, eventually moving to Bathurst the following September to enroll in Electronics Engineering Technology within the field of telecommunications at New Brunswick Community College – Bathurst Campus. The persistent drive to move forward and succeed on practical terms as well, prompted Daniel to switch gears at the end of first year. Without taking a break, he joined summer reserve boot camp in Aldershot, Nova Scotia. Employment prospects and immediate cash fueled this change in direction.

Right after boot camp, Daniel completed a military driver course in Gagetown, and then willingly accepted to undergo intensive infantry training in August. Though some of his peers experienced heat stroke during this especially hot period, Daniel was relentless and persevered through the training.

Though all looked amazingly good on paper, personal challenges loomed. Adjusting to an Anglophone military environment, was completely foreign to Daniel – this French-speaking loner who had done it all himself for most of his life. He was so “afraid to fail, to look bad” that Daniel pushed himself – adrenalin pumping –  to the point of developing stress fractures in both feet and injuring his right knee. All the while he dreaded the yelling that brought back awful memories of dad and mom fighting.  Again a fighting spirit and a “never give up” attitude compelled Daniel to simultaneously finish college with an electronics technologist diploma in January 2003 scoring above 85% in all his subjects.

Continuing to serve with the 2nd Batallion Reserve Unit, The Royal New Brunswick Regiment, B Company located in Bathurst, Daniel volunteered to participate in the Nijmegen March in July 2003. (The International Four Day Marches Nijmegen in the Netherlands, the largest multiple-day marching event in the world held since 1952, is known for its gruelling pace: 40 km daily in full military gear carrying a 25 lb. rucksack over a 4-day period.) So driven was Daniel to be part of this historic event, that he bloodied and blistered his feet while preparing at CFB Gagetown. He desperately wanted to participate and refused to quit but was finally forced to withdraw on medical recommendation. In Daniel’s eyes, this was a major personal failure that damaged his self-esteem and confidence, and would take years to overcome.

Officially joining the regular Royal Canadian Navy as an Ordinary Seaman in 2004 and specializing in sonar-navigation systems, Daniel soon undertook “on-the-job training” with the HMCS Ville de Québec, a Canadian patrol frigate over an 18-month period.  A soldier’s environment of drinking, smoking and greasy food took its toll on him. Still having difficulty communicating with colleagues and experiencing mounting anxiety contributed to a growing personal turmoil that Daniel kept under wraps – but not for long.

Once back on shore taking the naval electronic technician academics journeyman QL5 course and its six months of equipment training, Daniel “crashed” for the first time. The immediate transition from sea life to the discipline of studies – and the standard to which he held himself in all that he did – was too much for Daniel. He started to see a psychologist. “I needed to address my life issues – rough childhood, loneliness, a prisoner within my own mind, no girlfriend, anxiety, parents’ separation, my temper – all these things I was trying to manage on my own and realized I couldn’t.”

Sustained by this support and his “never say die” perseverance, Daniel completed his QL5 and was subsequently deployed on the HMCS St. John’s on October 1, 2007 that took him to the States, Central America and the Caribbean. From handling drug smuggling in the Caribbean Sea to enjoying shore leave in Key West; from moving food supplies during OP Horatio and bringing emergency food supplies to the desperate Haitians; to helping the ship’s cook provide food and water to the crew; to maintaining acoustic systems, and introducing improved sanitary methods in the ship’s kitchen as the go-to scullery guy, it is here we encounter the “sobbing QL5 ranked naval electronic technician closing the door to a small darkened room…”

Now that you have learned something about who Daniel Morin is – the guy who has shouldered personal responsibility and accountability throughout his life, and who has never backed down from a challenge, you feel sure he must have survived this bleakest moment. You are right – he did survive and then some.

Daniel wanted off ship immediately and was back in Halifax seeking medical attention by October, 2008. Diagnosed with acute general anxiety and mood disorder, yet wanting a three-year retention to eliminate a $28,000 debt incurred through emotional credit card spending, Daniel was granted his request. Posted as IT tech support to HMCS Trinity, the CFB Halifax base’s intelligence facility, an incident there could have taken Daniel off the rails once more. He was called to put on his DEU uniform for unit’s change of command in summer of 2012 – a uniform he hadn’t worn for some time.

His excess weight was nearly bursting open the front buttons, prompting two tactless seamen to bully and make fun of him. Instead of losing his temper, Daniel resolved to lose weight and get fit. With his determined focus, and an introduction to martial arts (Japanese Jujitsu, Judo, Jeet Kune Do, Wing Chun, Muay Thai, BJJ, grappling, Aikido) at the beginning of 2013,
Daniel was in the gym nearly 15 hours a week. Exhaustion from training curbed the physical outbursts; IT work trimmed the debt.

Medically released in December, 2014, Daniel moved to Ottawa in spring the following year to a promising career in IT and an ever-growing interest in Aikido. In two years, he would find his key life lines, attributing personal stability to Willis College where he first graduated in the Network Security Professional course. This past June, Daniel enrolled in the new Veteran Friendly Transition Program (VFTP). Not only has he been accepted as a Cyber-Security Analyst student within the Program, Daniel is also actively promoting its benefits to other Veterans like him.

“The unprecedented support from Willis College CEO/President Rima Aristocrat,  Lieutenant-General (Ret’d) Walter Seminiaw, Karen Perez and the College community has re-ignited me to feel more alive as part of an emerging VFTP program focused
on giving another breath of life to Veterans who wrote a blank cheque in the name of the Canadian nation.”

The initial gym commitment of 10 months from July 2015 to April 2016 to strengthen his core for martial arts combined with personal training in Yoshinkan Aikido with Stephen Ohlman, a 6th degree blackbelt, and regular appointments with his doctor/psychiatrist have given Daniel a new perspective on life, as well as increased confidence and self-esteem. Significant too, is that all services are located close to Daniel’s place: using public transportation and navigating Ottawa’s high density urban environment continue to be PTSD triggers.

Not to be out-done by his fragile knees, Daniel is participating in the 5km as part of the Willis College Army Run team on September 17, 2017.  It’s likely you’ll notice him – tall and athletic with a ready smile. If you look a little closer, you’ll see three tattoos showing on the muscled arms. The Chinese characters running down Daniel’s right arm read “Perseverance” and the Japanese Characters “Aikido”. For Daniel, Aikido is life and it has taught him to live in harmony with the universe. Undefeated in adversity, this Veteran has come a long way from that small darkened room.